Increasing prevalence
Non-contact distance measurement is becoming an indispensable technology in many aspects of our lives. Our smartphones measure the distance to a subject in order to focus while taking a photo. Non-contact distance meters, now readily available at home improvement stores, allow for the measurement of the distance from a wall to a pillar for DIY projects, while those that can measure longer distances are used on construction sites and for agricultural land management.
Various tools are available for non-contact distance measurement. There are palm-sized height meters capable of measuring the time it takes for sound to be reflected back to its location. Previously, cameras used the angular difference (parallax) between lines connecting two distant lenses to the subject, whereas today, the most common method used to measure distance or its extended 3D shape is laser light. 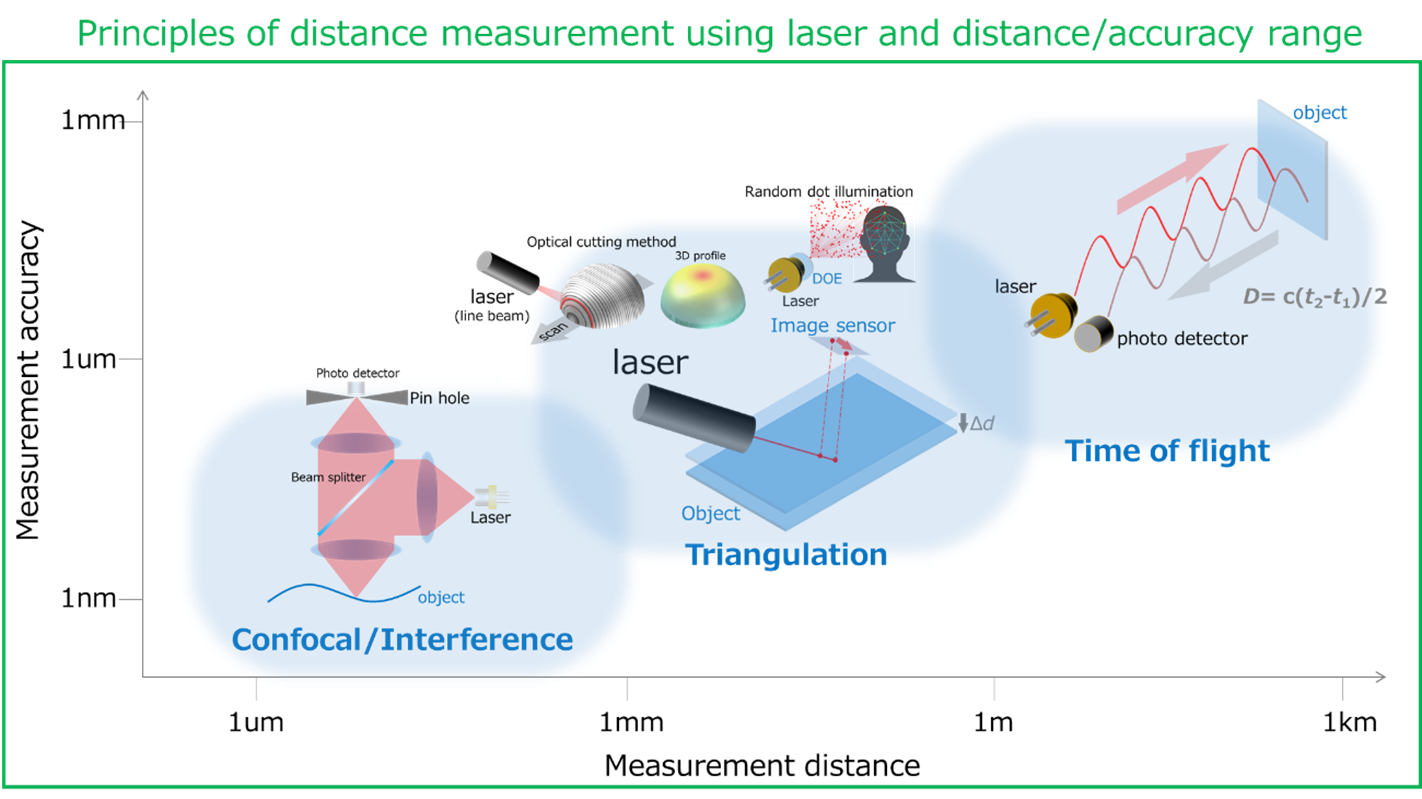 For distance measurement in the range of millimeters (mm) to meters (m), a laser beam is illuminated on the object to be measured. Then, the laser image on the object is measured from a position off of the laser optical axis. This technique shares its principle with the method of triangulation, which is used for drawing topographic maps. An example is optical cutting, in which a line of laser light is illuminated on the measurement target. The displacement of the line laser image is captured by an image sensor, then converted into 3D shape information. The same principle is applied when illuminating random dots generated by diffractive optical elements and capturing their displacement, which is used by smartphones for face recognition.
In order to measure distances in the meter (m) to kilometer (km) range, a process based on time of flight (ToF) (the time it takes for light to reflect off an object and return) is often used. ToF measurement is classified into direct ToF (dToF), which measures the time between the laser beam’s emission and return, and indirect ToF (iToF), which detects the phase difference between the emitted light and returned light. In both cases, a pulsed high-power laser beam is used to capture the returned light from a long-distance object with sufficient intensity. Additionally, ToF measurement is widely used for automatic driving; construction sites; and infrastructure management via Light Detection and Ranging (LIDAR), which measures distance by scanning the laser beam in three dimensions.
Confocal optics and interferometry are used to measure microscopic distances and 3D shapes of micrometers and smaller. Confocal microscopy is widely used for industrial applications, but also for measuring the 3D shape of cells, making it an indispensable tool within current life sciences.

For these types of triangulation and ToF measurements, a transverse single mode laser is generally used, as the spot diameter (or line width) to be irradiated must be small enough to obtain high spatial resolution.
There are many factors to consider when selecting a wavelength. Although the emission efficiency of laser diodes is currently highest in the near-infrared region (700-1000nm), many silicon (Si) sensors (the most commonly used photodetectors) have the highest sensitivity in the 500-700nm band. As such, in consideration of the total system’s efficiency, laser diodes in the red band (630-700nm) are also widely used. Specifically, red laser diodes are often used when the irradiated spot on the measurement target needs to be visible (e.g., in distance meters for DIY use).
The appropriate wavelength may also vary depending on the material to be measured. When measuring the shape of transparent plastic or glass, a blue-violet laser diode may be used due to its higher surface reflectivity at these wavelengths than red. Blue-violet light may also be used on objects with metallic luster, since the scattered light that disrupts the measurement is smaller than within the red band.
Overall, the output value of the laser diode is selected from various ranges based on the type of measurement. High power is required for long distance measurements or measurements requiring high-speed scanning, although low-power laser may need to be used for laser safety reasons. In terms of output power (especially for ToF measurements), the laser may need to be pulsed. The high efficiency and high allowable operating temperature of laser diodes are useful considerations for these selections. 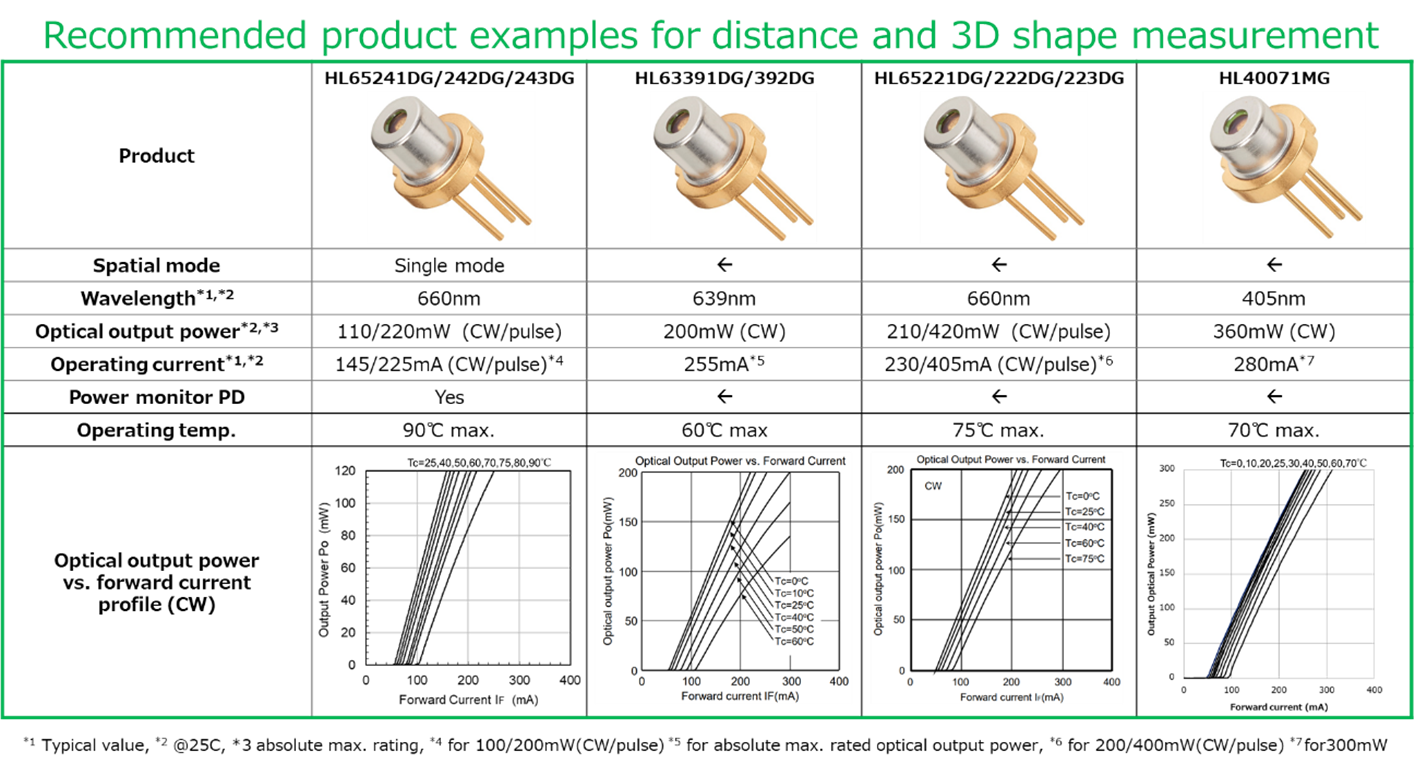 1. With a wavelength of 660nm and optical output power of 110/220mW (CW/pulse), HL65241DG/HL65242DG/HL65243DG are laser diodes that have achieved high temperature operation (max. 90°C) by optimizing the LD crystal growth conditions. These products are ideal for equipment that requires operation under high temperature settings, such as measurement equipment used in outdoor environments.
2. HL63391DG/HL63392DG have achieved 200mW as single-mode lasers at a wavelength of 639nm with high visibility. HL63391DG/HL63392DG are suitable for applications where the laser image on the measurement target needs to be visible, as well as for long-distance measurement and the measurement of large objects requiring high power.
3. HL65221DG/HL65222DG/HL65223DG, which achieve high output power of 210/420mW (CW/pulse, -10~+60°C) at 660nm, are also suitable for long-distance measurement and large object measurement necessitating high power (especially in pulse operation). The ability to operate at temperatures up to 75°C also makes them a viable choice for instrument mounting.
4. The shorter 405nm (blue-violet) laser is often used for measurements on transparent glass, plastic, and metal surfaces (as described in the previous section). HL40071MG has a high power of 300mW (CW) at 405nm and is suitable for long range and high scanning speed 3D measurements.
All of the laser diodes introduced here are transverse single-mode products packaged in a small TO-CAN (5.6mm diameter). In addition, a monitoring photodiode is built into the CAN package, which easily enables optical output control.
Further products suitable for distance measurement and 3D shape measurement are listed below: