Ushio Inc. (Head Office: Tokyo, President & CEO: Koji Naito, hereinafter referred to as “Ushio”) is proud to announce the sample release of high-efficiency and compact 200mW high-power single-mode laser diodes (LDs) with wavelength of 675nm and 690nm as a red light source that can be used in a wide range of applications, such as research and development in the life science, biomedical and quantum fields in October 2021.

Red LDs have a wide range of lasing wavelengths from 630 nm to 690 nm. Various applications and specifications have been commercialized for each wavelength and optical output power.

Wavelengths in the 670nm band have a wide range of applications, including life science fields such as Raman spectroscopy and confocal microscopy, medical fields such as acne treatment and blemish treatment, as well as applications in quantum technology fields such as atomic laser cooling and quantum computers, where research and development has been active in recent years.

Wavelengths in the 690nm band are being developed and put to practical use in research and development in the quantum technology field represented by optical lattice clocks, and in the medical field, such as photodynamic therapy (PDT) and photoimmunotherapy for cancer.

However, module products such as DPSS lasers*1 that have already been commercialized for these applications are inevitably larger, more complex, and more expensive due to their structure. In addition, compared to semiconductor LDs, their luminous efficiency is lower, which has been a barrier to their widespread adoption.

In order to address these issues, Ushio has expanded the lasing wavelength range to the long wavelength band by applying the high power, high efficiency and high reliability technologies cultivated through the development of 640nm and 660nm band products. Furthermore, by adopting a 5.6mm package, we have been able to achieve a smaller, lighter, and lower cost product compared to current module products. This will enable a wider range of use in relevant applications. The sample lineup consists of HL67001DG and HL69001DG, and the following specifications have been achieved. With the shipment of these samples, Ushio will further expand its lineup of red LDs and contribute to the spread and improvement of the performance of red LD-equipped devices in a wider range of fields. 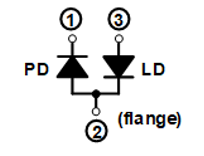 Please use the online inquiry form on our website.